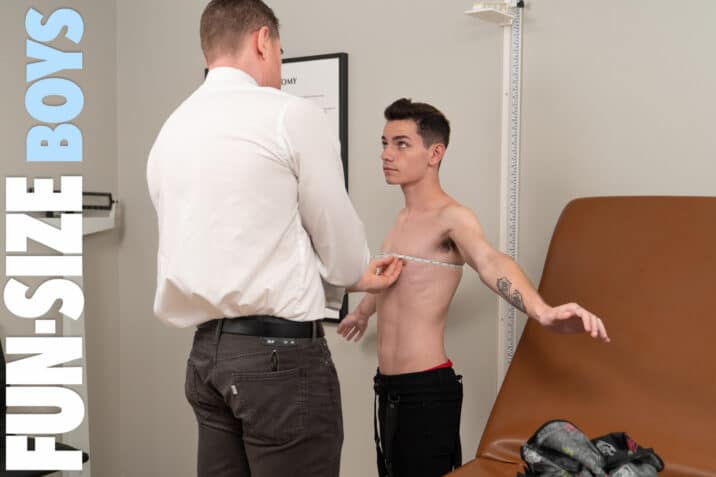 Eli hadn’t seen a doctor since he was young. He has been moving from one job to the next since high school graduation, and he didn’t have any insurance. This is why he tried to avoid going to the doctor. Despite being small for his age, he was very healthy. Eli was naturally 5’5″ tall and 115 lbs.

He didn’t feel small until he entered Dr. Wolf’s office. He was over a foot taller that the older man and his deep voice resonated in the small space. Eli felt like he had been physically subjugated by the older man just by being in that same room. This feeling was more than he expected.

Eli was captivated by Dr. Wolf’s measurements of his height and weight. He was struck by how handsome he looked, and how his eyes seemed constantly to drop to his. Then, he would meet his gaze briefly before returning to the thing he was supposed be looking at. Eli didn’t know if he was looking at him, but he could feel the tension build up when he removed his clothes.

As Dr. Wolf started to examine Eli’s heart, he felt his hands pressing against his body. Although the touch was warm and soft, it seemed to conceal a deeper yearning. Dr. Wolf took his time and sat down on Eli’s chest, listening to his pulse, taking in subtle notes of his excitement. Eli was the type of patient Dr. Wolf loved providing comprehensive care to. It was obvious that something was going on between them.

Although Dr. Wolf attempted to remain professional and responsible, Eli was unable to help but feel a little bit more sexually stimulated when Dr. Wolf checked Eli’s legs. The older man enjoyed handling the boy’s cocks and balls, feeling their weight in big hands, and watching the shaft rise from his fingertips. Eli was a stunning specimen that he had to own.

The handsome daddy felt his insides press against Eli’s digits, and could feel it fucking him. Although he wasn’t a virgin, he felt like a vice around his knuckles. He began to moan as he worked his ways deeper into the shaft, enjoying every minute of the inspection and Dr. Wolf’s hard work. Although Eli knew this was not a medical issue, he wasn’t willing to question it because he feared it might stop.

The young man sat down again and reached out to touch Eli’s crotch. He was delighted to discover that the doctor’s crotch was bulging from the conceal erection of the older gentleman. Dr. Wolf did not stop him. Instead, Dr. Wolf leaned down and gave the boys a gentle, sweet kiss.

Eli was invited by Dr. Wolf to get out his cock. This gave him the chance to show how excited he was. Eli’s eyes almost popped out of his head as he discovered what Dr. Wolf had in his pants. The ten-inch-long cock was perfectly smooth and stiff down to its base. It was supported by huge hanging balls and gingerly red hair. Although Eli was intimidated by its size Dr. Wolf continued to caress Eli, making him more confident in the intentions of the older man.

Eli touched Dr. Wolf’s shaft and felt it pulse before the doctor placed him back on his table. The exam stirrups were pulled out and the young man was given a place for his feet to rest. Eli watched nervously as the older man lubricated his cock and prepared himself for insert. Although they didn’t speak, Eli was so nervous that he almost cried, “Yes, please!”

Dr. Wolf climbed behind Eli and placed his penis at Eli’s entrance. Eli, eager to open his mouth, guided the man’s penis to his sphincter. Although it felt like an eternity until Wolf’s shaft started moving inside of him, Eli could feel every inch and length of his body prying him open.

The naked cock glided slowly and smoothly, being held tightly by Eli’s young twink hole. Although Dr. Wolf could sense it relax, the cock remained firm as he made his way in. His shallow thrusts seemed to have caused Eli’s cock to leak puss. Although he didn’t want Eli to move too fast, his desire to breed him was too strong for him to resist.

Dr. Wolf turned Eli around and let him bounce on his cock. This allowed him to control the speed of the fucking. Although it was enough for Eli to get used to the large cock, Dr. Wolf could not hold his patience. He loved Eli so much, and he was so happy for his cock.